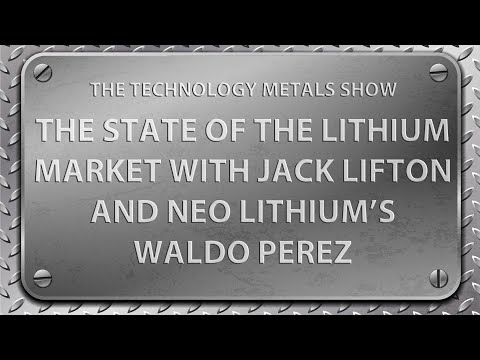 Technology Metals Show hosts Jack Lifton and Peter Clausi interview Waldo Perez, President, CEO and Director of Neo Lithium Corp. (TSXV: NLC | OTCQX: NTTHF) on the state of the lithium market. “When it comes to lithium there are two places and two sources.” Waldo started. “First is the Puna plateau which is Chile, Bolivia and Argentina for brine resources. 60% of the lithium of the planet is located in an area that covers this plateau.” He continued, “The other source is a mineral called spodumene. This mineral is more common in the planet but the best spodumene is found in Australia.”

In this interview, which may also be viewed on YouTube (click here to subscribe to the InvestorIntel Channel), Waldo went on to say that CATL – largest battery producer in the world, is a strategic investor in Neo Lithium. He explained that Neo Lithum’s Tres Quebradas (3Q) Lithium Project was selected by CATL because it is the highest grade undeveloped project in the world and has low OPEX and CAPEX. The project has 50% IRR and payback of less than 2 years. To watch the full interview, click here