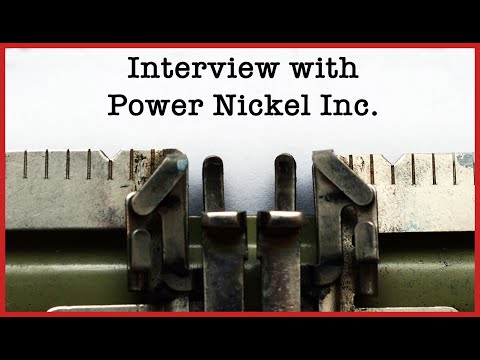 In the interview, which can also be viewed in full on the InvestorIntel YouTube channel (click here), Terry discusses exploration plans and an upcoming NI 43-101 resource update of the historic resource on its flagship NISK project in Quebec, a high-grade nickel sulphide deposit which contains nickel, copper, cobalt, and platinum group elements. Terry also talks about the possibility of Power Nickel spinning out its Golden Ivan gold-copper project in British Columbia’s Golden Triangle to focus on the more advanced development story of NISK, which has attracted investment in Power Nickel by two of the top-ranked hedge funds.

Terry explains that Power Nickel is positioned to be one of the greenest sources of class-1 nickel in the world, and that its resource report expected in June will put Power Nickel on the industry’s radar. “We’re in the right market in the right jurisdiction at the right time,” he tells Tracy.

Power Nickel (then called Chilean Metals) announced on June 8th, 2021 that an agreement has been made to complete the 100% acquisition of its Golden Ivan project in the heart of the Golden Triangle. The Golden Triangle has reported mineral resources (past production and current resources) in a total of 67 million ounces of gold, 569 million ounces of silver, and 27 billion pounds of copper. This property hosts two known mineral showings (gold ore and magee), and a portion of the past-producing Silverado mine, which was reportedly exploited between 1921 and 1939. These mineral showings are described to be Polymetallic veins that contain quantities of silver, lead, zinc, plus/minus gold, and plus/minus copper.

Power Nickel is the 100-per-cent owner of five properties comprising over 50,000 acres strategically located in the prolific iron-oxide-copper-gold belt of northern Chile. It also owns a 3-per-cent NSR royalty interest on any future production from the Copaquire copper-molybdenum deposit, recently sold to a subsidiary of Teck resources Inc. Under the terms of the sale agreement, Teck has the right to acquire one-third of the 3-per-cent NSR for $3-million at any time. The Copaquire property borders Teck’s producing Quebrada Blanca copper mine in Chile’s first region.