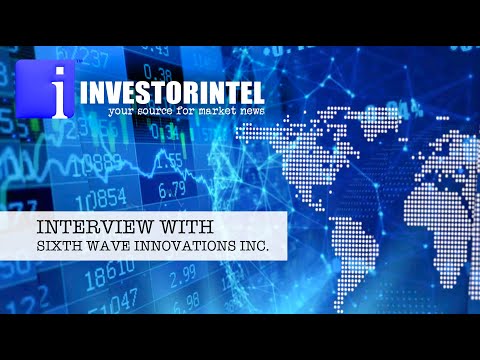 “We’re pretty excited,” said Dr. Gluckman, “that in addition to the Biden win it was pretty clear that the referendums on the state ballots in the U.S. were extremely positive and forward-looking for the future of cannabis and the significant expansion in the United States which is obviously a huge market.”

Asked about what it means, Dr. Gluckman said that Sixth Wave sees it “as a tremendous opportunity for licensed producers to expand their footprints into different spaces and certainly for new equipment requirements which will include Affinity, so we’re stoked.” Affinity™ is Sixth Wave’s cannabinoid purification system.

Discussing the Affinity cannabinoid purification system revenue model, Dr. Gluckman explains that it work on a “total system performance license” basis, where Sixth Wave provides the technology to licensed cannabis producers on a “small profit margin basis”, but then partners to provide upgrades and maintenance in exchange for a portion of the producer’s revenue stream. As Sixth Wave’s Affinity optimization can save a projected 50% of a producer’s production costs, this mutually beneficial arrangement can create a substantial revenue stream for both the producer and Sixth Wave.

Dr. Gluckman explains to Tracy how the application of Sixth Wave’s patented Molecular Imprint Polymers (#MIPs) technology creates “consistent and high purity” cannabinoid from a producer’s raw material that is essential to creating a commercial product.

Regarding revenue expectations, Dr. Gluckman said that they expect to see revenue through a deal with Green Envy as early as December, and ramping up in the first quarter of 2021. Answering Tracy’s question about investors who missed the “first wave” of cannabis investment, he said that “the very interesting thing now is that what we have seen is that the growers are all growing,” and that “as new states come on board they are all going to need new licensed producers.” And since there are federal restrictions on interstate movement of cannabis, production will have to be local to each state, requiring multiple production facilities

“We’re really looking forward to it and scaling up significantly next year,” Dr. Gluckman said.