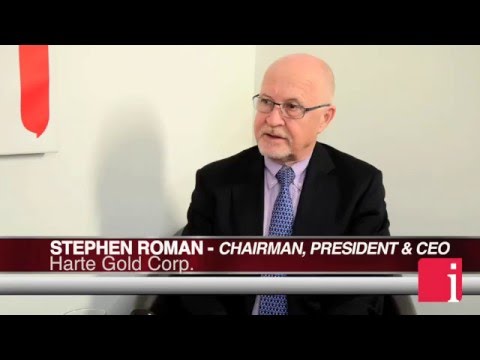 April 20, 2016 – In a special InvestorIntel interview, Publisher Tracy Weslosky speaks with Stephen Roman, Chairman, CEO and President of Harte Gold Corp. — and also the winner of the “Prospector of the Year” award at the recent PDAC in Toronto.

In this interview, Stephen Roman tells how

Tracy Weslosky: Stephen I’m lucky to even have a moment with you. Your stock moved up 142% last week. Can you tell us what is moving your stock?

Stephen Roman: Well, I think actually there’s a few things that are moving the stock. One is that people at the PDAC, which was last week, they saw some of our videos. They noticed that we were actually going into production and things that we told them a year ago were actually coming true now. They could see the trucks moving and the drilling and the last thing going on and they said, hey, this is a real story.

Tracy Weslosky: I noticed mining strategist Christopher Ecclestone was saying the sweet zone of the Sugar Zone and he was talking about how Harte Gold is ranking for leader in your race towards production. Can you give us an update on production?

Stephen Roman: Production will start in two weeks. We’ll be shipping gold ore to Barrick for milling and so April will be our first production month under our bulk sample program so cash flow will start in May.

Tracy Weslosky: For those of the InvestorIntel audience that may not be familiar with the Harte Gold story, can you just give us a little bit of an overview of Harte Gold and your deal with Barrick for instance Stephan? Thank you.

Stephen Roman: Barrick have a mill 60km away from Harte and, rather than us building our own mill, we made a deal with Barrick to toll mill our ore during this bulk sample phase. We pay them a fee and they mill the ore and give us a check every month.

Tracy Weslosky: Well, and of course there is a bit of a rumbling happening about a gold rush happening. I was reading recently that your production costs are quite low: $600.00, is that correct? Can you tell us a little bit more about this?

Stephen Roman: The ore body is very high-grade, 10 grams per ton. It’s probably one of the highest in the world. I think Red Lake may have similar grades, but our grade being so high we don’t have to mine a lot of tons to make the ounces so that keeps the costs very low.

Tracy Weslosky: I need you just to dumb down the bulk sampling deal that you have just a little bit for our audience and explain why this is so exciting.