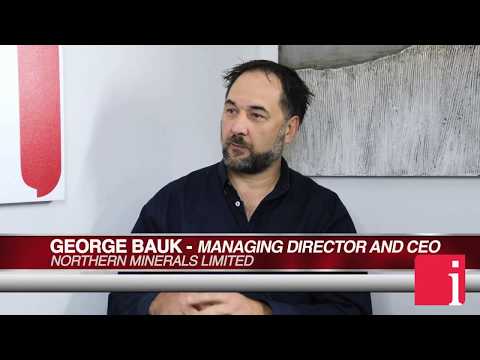 George Bauk, Managing Director and CEO of Northern Minerals Ltd. (ASX: NTU) in an interview with InvestorIntel Editor Peter Clausi discuss the Browns Range rare earth project in Western Australia. Delving into the history of Northern Minerals’ history with George, the focus of this interview is on his commitment to achieving milestones moving forward for shareholders. The pilot plant will extract dysprosium and terbium from the xenotime mineralization for 3 years with 100% of production signed off under an off take partner.

Peter Clausi: How was the flight in?

George Bauk: From Shanghai to Hong Kong to here, 15 hours all good.

Peter Clausi: You must have a great project to talk about to make that flight worthwhile.

George Bauk: Absolutely. It’s been 7 years in the making.

Peter Clausi: 7 years. Is that when it was first staked, found?

George Bauk: Discovered in 2010 and from there exploration success, project development and the trucks are rolling in right now.

Peter Clausi: When did you join the company?

Peter Clausi: So it’s all been with you.

Peter Clausi: Let’s talk about the project then. What kind of metals are we looking for?

George Bauk: Okay. We’ve got a xenotime mineralization, which hosts heavy rare earths. We’ve got a very dominant dysprosium, about 9% and terbium. That’s the second biggest. They’re the dominant minerals in our deposit.

Peter Clausi: If you’re into mining then you must have your metallurgy figured out.

George Bauk: Yes. We’ve been doing metallurgy since like 2010. We actually started metallurgy before we drilled our first hole to make sure that it could be processed.

Peter Clausi: You had a big event happen in the middle of April.

George Bauk: Yeah, absolutely. The board got together on the 18th of April just after Easter and we approved the project to go forward and commence mining.

Peter Clausi: How will you fund that?

George Bauk: It’s being funded in a very interesting way because obviously with industrial minerals it’s a much more complex project to finance as opposed to gold and iron ore so through equity, through prepayments from our offtake partner and also a deferred payment from our Engineering, Procurement, and Construction (EPC) contractor as well as some debt factoring on our research and development we get from the Australian government…to access the full interview, click here