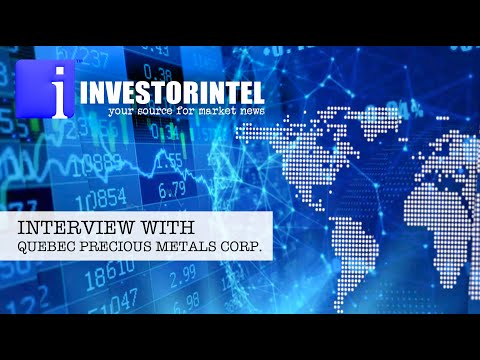 InvestorIntel’s Tracy Weslosky speaks with Normand Champigny, CEO and Director of Quebec Precious Metals Corporation (TSXV: QPM | OTCQB: CJCFF) (QPM), about the discovery from surface sampling of a new gold and base metals system at Elmer East with grabs up to 17.75 g/t Au. “We believe this result is the second-best result in the area.” Normand said. “It is a result of hard work to identify new targets…all very exciting news in another part of James Bay which again shows the promise of James Bay for gold exploration.”

Speaking about the competitive advantages of QPM in response to this question, Normand said, “We have created a company which has very good shareholder base with Newmont, one of the largest gold companies in the world, as our key shareholder.” He continued. “We have a team that has been working in the area for many years. We have good infrastructure with powerlines and roads. We can drill 12 months of the year and we have significant ground in the area.”

Normand also provided an update on the drill results from the La Pointe Extension discovery and a near surface discovery at Simon area on the 100% owned Sakami Project. “La Pointe is a deposit with multi-million ounce potential.” Normand said. “Our goal is to demonstrate a potential of 2 million ounces of gold.”

In a recent InvestorIntel interview, Tracy Weslosky speaks with Gianni Kovacevic, CEO of CopperBank Resources Corp. (CSE: CBK), about the […]

StageZero on revenues being generated via testing operations, partners and a status report on the Aristotle test

In a recent InvestorIntel interview, Peter Clausi speaks with David Morgan of The Morgan Report, about investing in silver, the […]