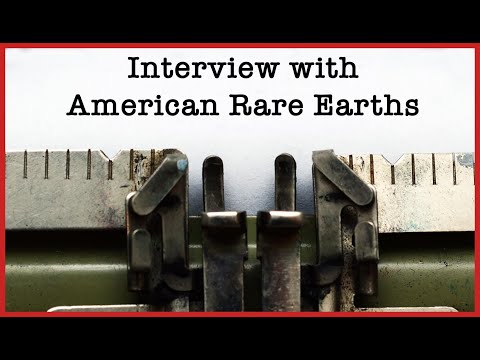 In this InvestorIntel interview with host Tracy Weslosky, American Rare Earths Limited’s (ASX: ARR | OTCQB: ARRNF) President – North America, Marty Weems talks about continuing positive news coming out of its Halleck Creek rare earths project, and how the company plans an updated JORC-compliant exploration target “to give the market an idea of what we mean when we say this project has the potential to be the largest rare earth JORC resource and development in the USA.”

In the interview, which can also be viewed in full on the InvestorIntel YouTube channel (click here to access InvestorChannel.com), Marty tells Tracy that with recent drill results “the grades appear very consistent to depths of exceeding 100 meters, so we’re not talking about a few little high-grade veins of rare earths. We’re talking exceptional thickness,” he says. He goes on to say that “it’s exposed at surface and really consistent to depths exceeding 100 meters, so the majority of the drill holes average over 4,100 parts per million total rare earth content – rare earth oxides – over more than 90 meters of mineralized thickness in average across those holes, so the project remains open at depth and laterally and that’s especially exciting considering we now have over 24 square kilometers of claim control at Halleck Creek.”

Marty tells Tracy that in addition to last week’s reported assay results, American Rare Earths was named the sole industry member of a consortium led by Lawrence Livermore National Laboratory (LLNL) that has been awarded up to $13 million in research funding to develop scalable, bio-based separation and purification of rare earths elements.

American Rare Earths Limited is an Australian company listed on the ASX with assets in the growing rare earth metals sector of the United States of America, emerging as an alternative international supply chain to China’s market dominance of a global rare earth market expected to expand to US$20 billion by the mid-2020s. The Company’s mission is to supply Critical Materials for Renewable Energy, Green Tech, Electric Vehicles, National Security, and a Carbon-Reduced Future.

Western Rare Earths (WRE) is the wholly-owned US subsidiary of the Company. ARR owns 100% of the world-class La Paz Rare Earth Project, located 170km northwest of Phoenix, Arizona. As a large tonnage, bulk deposit, La Paz is potentially the largest, rare-earth deposit in the USA and benefits from containing exceptionally low penalty elements such as radioactive thorium and uranium. Approximately 742 – 928 million tonnes of Rare Earths mineralized rocks are identified as an exploration target in the La Paz Rare Earths project’s Southwest area with an average TREO Grade of 350 – 400ppm and Scandium Oxide grade of 20-24.5ppm. The new exploration Target is additive to the La Paz Rare Earth project recently upgraded 170MT Resource. (ASX Announcement, 29 September 2021). During the period from February to April 2022 the Company drilled nine holes for 821 metres and collected 677 samples in the La Paz southwest area. The assay results from the first 332 samples demonstrate rock type associated with higher rare earth grades. The enhanced grades and thickness of the mineralized zone have accelerated exploration planning. The Company is working on establishing a JORC resource for the southwest area (ASX Announcement, 14 June 2022). Preliminary metallurgical test work demonstrates that La Paz ore can be effectively concentrated using conventional magnetic separation, selective grinding and direct flotation. Under the guidance of Wood Australia, advanced metallurgy and mineral processing test work is near completion with Nagrom Laboratories in Perth Western Australia (ASX Announcement, 7 April 2022).

In the first half of 2021, ARR acquired the USA REE asset, the Halleck Creek Project in Wyoming. Since acquiring the asset the company has increased the land holding to over 6,000+ acres. Approximately 308 to 385 million tonnes of rare earths mineralized rocks were identified as an exploration target for the Halleck Creek project area with an average Total Rare Earth Oxide (TREO) grade of 2,330 – 2,912 ppm. Initial surface sampling of the Overton Mountain area conducted in 2018 revealed average TREO values of 3,297 ppm, average Heavy Rare Earth Oxide (HREO) values of 244 ppm, and average Magnetic Rare Earth Oxide (MREO) values of 816 ppm. (ASX Announcement,26 April 2022). The maiden exploration drilling program was completed in April 2022. The Company is updating the existing exploration target and developing a more comprehensive drilling program with the objective of defining a high tonnage maiden JORC resource.

La Paz and Halleck Creek’s mineral profiles are incorporated into emerging US advanced rare earth processing technologies in collaboration with US national laboratories, major universities and the US DOE innovation hub, the Critical Materials Institute.