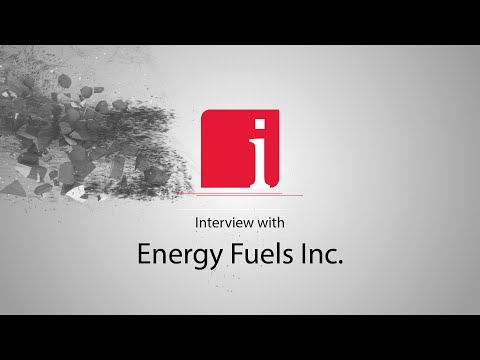 “We have three production facilities. We have the White Mesa Mill in southeast Utah that is operating today…It has a capacity of producing 8 million pounds a year. We have an in-situ recovery (ISR) facility in Wyoming called the Nichols Ranch facility. It has a licensed capacity of 2 million pounds a year. Then we have Alta Mesa in-situ facility in South Texas which has produced about a million pounds per year. Nobody has as much capacity as we have…Uranium has not necessarily been on the government’s watchlist until recently. When President Trump came into office, he issued a critical minerals list and there was finally a recognition that uranium is critical not just for the US national security but also for US energy security. There were 35 minerals on that list including vanadium. We are one of the major producers of vanadium in the United States. So, two of the minerals on that list are produced by Energy Fuels.” States Curtis Moore, VP of Marketing and Corporate Development at Energy Fuels Inc. (NYSE American: UUUU | TSX: EFR), in an interview with InvestorIntel’s Jack Lifton.

Curtis went on to say that the US consumes about 47 million pounds of uranium per year but the country produced just 172,000 pounds of uranium last year which is not sufficient to supply even one nuclear reactor. Energy Fuels is the largest producer of uranium in the United States and has the only producing conventional uranium mill in the U.S. Curtis also said that the US imports close to 40% of its uranium from Kazakstan, Russia, and Uzbekistan which are geopolitical rivals of the country. Uranium price is about $25 per pound which below the cost of production of almost all of the US uranium producers. The heavily subsidized state-owned enterprises of Russia and China are flooding the market which is having an impact on the national security of the countries like the United States.