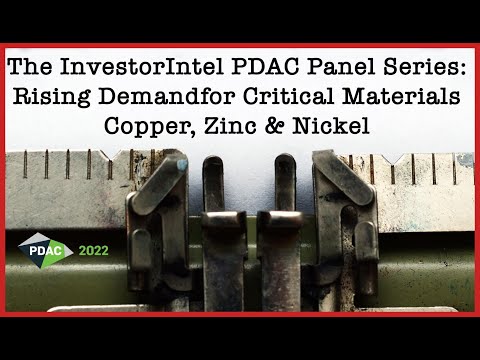 In the video, which can also be viewed in full on the InvestorIntel YouTube channel (click here), Kodiak Copper Corp. President and CEO Claudia Tornquist talks about copper’s “very big demand on the horizon driven by the green revolution energy transition”, including its increased use in EVs, and wind and solar power technologies. James Tuer, President and CEO of Fjordland Exploration Inc. discusses prolific and nickel-friendly jurisdictions, such as Manitoba and Labrador. The future demand for nickel will be driven by increasing world urbanization and electrification, according to panelist Terry Lynch, CEO of Power Nickel Inc. World demand for zinc will also increase as a crucial battery metal and coating says Metallum Resources President and CEO, Kerem Usenmez.

While all members of the panel agree that demand for critical materials such as copper, nickel and zinc will continue to increase rapidly in the near future, they also caution that “we have to be cautious about prices getting ahead of the market right now” or be in danger that “it will tear down what we’re trying to build up.”

However, “we’re in the right spot right now,” says James Tuer of Fjordland Exploration, “because we know that even in an inflationary market these commodities are are going to do well because they’re required for what the world is saying they want to do and where they want to go, so politically it’s going to push us in the in the right direction.”

Kodiak is focused on its 100% owned copper porphyry projects in Canada and the USA. The Company’s most advanced asset is the MPD copper-gold porphyry project in the prolific Quesnel Trough in south-central British Columbia, Canada. MPD has all the hallmarks of a large, multi-centered porphyry system. Kodiak has made the Gate Zone discovery of high-grade mineralization within a wide mineralized envelope, and MPD hosts several other targets with similar discovery potential. Kodiak also holds the Mohave copper-molybdenum-silver porphyry project in Arizona, USA, near the world-class Bagdad mine. Kodiak’s porphyry projects have both been historically drilled and present known mineral discoveries with the potential to hold large-scale deposits.

Kodiak’s founder and Chairman is Chris Taylor who is well-known for his discovery success with Great Bear Resources. Kodiak is also part of Discovery Group led by John Robins, one of the most successful mining entrepreneurs in Canada.

Fjordland Exploration Inc. is a mineral exploration company that is focused on the discovery of large-scale economic metal deposits in Canada.

In collaboration with Ivanhoe Electric Inc. and Commander Resources Ltd., Fjordland is exploring the SVB “Pants Lake Intrusive” target which is in a geologic setting analogous to the nearby nickel-cobalt-copper Voisey’s Bay deposit. Fjordland has earned a 75% interest in the project.

Fjordland, as operator, has an agreement to acquire 100% of the Renzy nickel-project located near Maniwaki, Quebec. The project encompasses the former Renzy Mine where, during the period from 1969 to 1972, 716,000 short tons were mined with average grades of 0.70% nickel and 0.72% copper. Fjordland has staked additional claims to increase the size of the project to 530 sq. km.

Power Nickel (then called Chilean Metals) announced on June 8th, 2021 that an agreement has been made to complete the 100% acquisition of its Golden Ivan project in the heart of the Golden Triangle. The Golden Triangle has reported mineral resources (past production and current resources) in a total of 67 million ounces of gold, 569 million ounces of silver, and 27 billion pounds of copper. This property hosts two known mineral showings (gold ore and magee), and a portion of the past-producing Silverado mine, which was reportedly exploited between 1921 and 1939. These mineral showings are described to be Polymetallic veins that contain quantities of silver, lead, zinc, plus/minus gold, and plus/minus copper.

Power Nickel is the 100-per-cent owner of five properties comprising over 50,000 acres strategically located in the prolific iron-oxide-copper-gold belt of northern Chile. It also owns a 3-per-cent NSR royalty interest on any future production from the Copaquire copper-molybdenum deposit, recently sold to a subsidiary of Teck resources Inc. Under the terms of the sale agreement, Teck has the right to acquire one-third of the 3-per-cent NSR for $3-million at any time. The Copaquire property borders Teck’s producing Quebrada Blanca copper mine in Chile’s first region.

The Company completed a positive Feasibility Study that highlights the Project will rank in the lowest quartile of operating costs (C1 costs – C$0.44 / lb; AISC C$0.51 / lb).  These low costs driven by the high grade of the Project drive robust economic returns. The majority of permits and licenses are in place allowing for a quick re-development following a Final investment Decision.