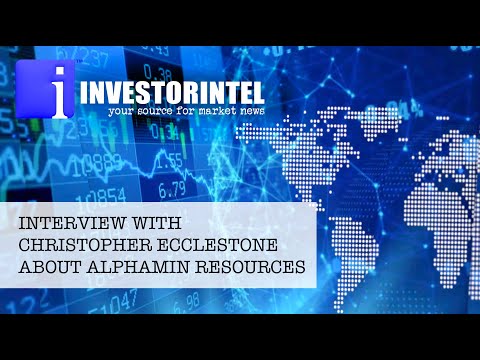 In this InvestorIntel interview, which may also be viewed on YouTube (click here to subscribe to the InvestorIntel Channel), Christopher highlighted the shortage of tin because of years of underinvestment in the sector and big alluvial deposits in Malaysia and Indonesia running out of resources. “Most of the tin deposits are under 1%,” he said. With a tin grade of roughly 4.5%, Alphamin’s Mpama North is the world’s highest-grade tin resource – about four times higher than most other operating tin mines in the world. Christopher said that with Alphamin producing about 4% of the world’s mined tin it is the “first new tin major since the 1970s.”

Hallgarten & Company was founded in 2003 by the former partners of a well-known economic think-tank. Their output encompasses top-down and bottom-up research from a Classical Economic (Austrian School) perspective. Over the years, the team has successfully picked trends using our macroeconomic underpinnings to guide investors through the treacherous waters of the markets. It was only natural, in light of the focus of Classical Economics upon the “real value” of monetary assets that the firm’s strengths should ultimately have become evident in resources sectors and projections of commodity trends.

Hallgarten & Company has advised and managed portfolios of offshore and onshore hedge funds.

Alphamin Resources is a low cost tin concentrate producer from its high grade deposit at Mpama North. This is on its mining license and it has an additional five exploration licenses covering a total of 1,270km2 in the North Kivu Province of the Democratic Republic of Congo (DRC). Alphamin is headquartered in Mauritius and listed on the Toronto Stock Exchange (TSXV: AFM) and the Johannesburg Stock Exchange AltX (JSE AltX: APH). At a tin grade of roughly 4.5%, Mpama North is the world’s highest-grade tin resource – about four times higher than most other operating tin mines in the world. The Mpama North mine is in production. It has an output of ~10 000 tonnes of contained tin per annum, amounting to ~3% of the world’s mined tin supply. Alphamin are aiming to increase annual tin output and life of mine through incremental production from Mpama South and by adding more mines in close proximity to the current production and from within our licensed footprint. Their management team has successfully developed and brought the Bisie tin mine to production and is focused on taking the business to the next level as they pursue their objective of realising the full value potential of this extraordinary tin complex.

This interview, which was produced by InvestorIntel Corp. (IIC) does not contain, nor does it purport to contain, a summary of all the material information concerning the “Company” being interviewed. IIC offers no representations or warranties that any of the information contained in this interview is accurate or complete.

Any projections given are principally intended for use as objectives and are not intended, and should not be taken, as assurances that the projected results will be obtained by the Company.  The assumptions used may not prove to be accurate and a potential decline in the Company’s financial condition or results of operations may negatively impact the value of its securities. Prospective investors are urged to review the Company’s profile on www.sedar.com and to carry out independent investigations in order to determine their interest in investing in the Company.

If you have any questions surrounding the content of this interview, please email info@investorintel.com.