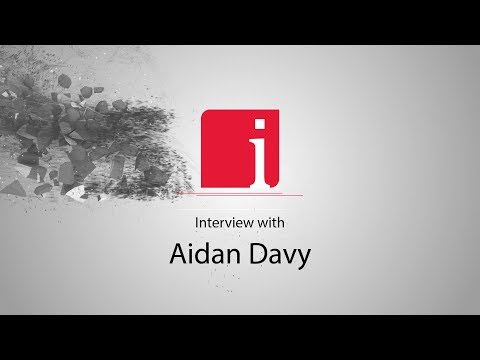 March 26, 2018 – “There’s a lot of those macro metals that are going to very well through that increased focus on the transition to a low carbon future. Cobalt, lithium, these are going to be huge as well, as is nickel.” – states Aidan Davy, COO and Director of the International Council on Mining and Metals (ICMM), in an interview with InvestorIntel’s Jeff Wareham.

Jeff Wareham: What are you seeing at PDAC this year?

Aidan Davy: It has been a real interesting PDAC. I have been coming to PDAC for about 6-7 years now. I lived with PDAC through the best of times and the worst of times.

Aidan Davy: It has been fascinating because I think even when the industry was going through the toughest times, and particularly we are thinking about 2015 still going into 2016, PDAC has remained resolutely kind of optimistic throughout that whole cycle. It still has been very, very different and I think very gratifying to see that there has been much more optimism here than we have had for a couple of years now.

Jeff Wareham: From what I understand you have quite a background in the critical metals and in sustainability. What themes do you see in 2018?

Aidan Davy: Interesting, for 2018, and my background is I am a sustainability professional. I have worked in this space for about 30 years. The organization I represent we work with 25 companies. They work across continents, across commodities and collectively they represent something like 30% to 50% of global production of major metals. When I look at the trends that I see for the industry there is four big trends that I am seeing as being really important in 2018. One is climate change. It is critically important, both in terms of the risk and the opportunity space. A second one is around the whole issue of contested ownership of resources. Some call it resource nationalism. I tend to avoid that term. That I think is a big, big issue for the sector. The third has got to be the rise in ethical consumer facing companies. The fourth is probably around gender, which is an issue that has been coming for this industry for a while and it is very much here.

Jeff Wareham: Wow. Those are some pretty broad subjects. Let us pick one. What do you think of those trends is going to matter the most in 2018?

Aidan Davy: I think they are all going to be critically important. Let us take the climate trend because that connects to the consumer facing company trend as well. I think historically this industry has been slow to engage on climate change, but in the past decade has really started to engage in a much, much more proactive way. Again, I think the initial entry point around this was very much looking at it through a risk lens. It has been around to, what extent are we contributing to carbon emissions? To what extent can we limit our impact in that space? But, also, to what extent can we make our operations more climate resilient? I think that has been a primary focus. What is changing now is the conversation increasingly is one around, what is the role of this industry in looking at the transition to a low-carbon future? That is very different for the mining and metals industry than oil and gas. Oil and gas is arguably faced with an existential crisis by the increasing attention around climate change, whereas for this industry there’s a huge opportunity.

Jeff Wareham: And what sort of companies do you see benefiting from those opportunities?:

Aidan Davy: There are a whole range of commodities that are going to be critically important in making that transition to a low carbon future. Whether you are talking about the critical metals and some of the rare earth metals. That’s essential, fundamental. Then some of the macro metals, for example, copper is a critical part of the solution here. Iron ore is a critical part because if you are building large scale infrastructure around low carbon economy then that’s an incredibly important commodity. Things like aluminum, fundamentally important. There’s a lot of those macro metals that are going to very well through that increased focus on the transition to a low carbon future. Cobalt, lithium, these are going to be huge as well, as is nickel…to access the complete interview, click here