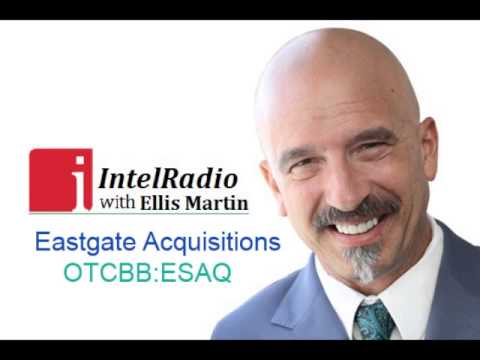 September 22, 2014 — The following is an IntelRadio news report hosted by Ellis Martin with Anna Gluskin, CEO and Chairman of EastGate Acquisitions Corporation (OTCBB: ESAQ) and is a special feature of InvestorIntel.

Ellis Martin: Today I’m speaking with Anna Gluskin, CEO and Chairman of EastGate Acquisitions Corporation trading on the OTC under the symbol ESAQ. Eastgate Acquisitions is an emerging pharmaceutical company exploring drug delivery innovations in the development of novel formulations and alternative dosage forms of existing biologically active molecules with a current focus on diabetes and non-invasive insulin delivery systems. Anna, welcome to IntelRadio. Thank you for joining us today.

Anna Gluskin: Thanks so much.

Ellis Martin: Just recently EastGate announced acquisitions that will augment its self-emulsifying sub-micron platform technology to include a broad spectrum of delivery options. Would you explain to our listeners what this means?

Anna Gluskin: Absolutely Ellis. So to answer your question, basically what we’re looking at is that most of the plant natural subjects subject and also different types of natural substances. Mother Nature basically did not acquire any kind of solubility. Most of these natural substances do not stabilize in water or even in alcohol. EastGate was developing different technologies and different techniques to be able to make this substances more palatable and more durable into the human body. At the end of the day we believe that we have developed a unique platform that allows for natural substances to be available to the body in the amounts that are necessary for therapeutic use. That’s why I am just mentioning that because we actually developed this technology and some of these that we acquired 2½ to 3 years ago are going to have a few years ago.

Ellis Martin: Currently EastGate is working towards acquiring the licensing rights to develop and manufacture an intraoral insulin formulation. This will allow EastGate the exclusive rights to deliver insulin without needle. Is this correct?  Does that mean if anyone else wants to use this technology they have to license it from you?

Anna Gluskin: Yes, absolutely, but let me just suggest the following here. It’s a combination of some acquisition, but mostly some of it is development in-house because as per your first question, the development of this technology allows us to also make it a platform, which means that a lot of substances, natural, medicinal and synthetic, could be used as potentially making it into the commercial drugs. The company continuously is developing the various methods that are going to allow for different types of molecules to be acceptable for the body. Insulin happens to be one of the most difficult one out there because it’s a large molecule. It’s a protein and when this comes into the body in the way of tablets,  let’s say, unprotected symptoms  we will call it, just insulin by itself, the body recognizes it as a protein, which means that it has to be dissociated and absorbed before it has its medicinal effect. Now there’s a number of proteins out there that this technology could be applied for and applied to. The whole point of it is we need to bring it into the body, of course without needles, but into it closer or area of the body where it’s going to be quickly absorbed in the bloodstream and only after that disassociated and absorb this protein. That is the nutshell of what we’re trying to achieve. For the first hundred years after insulin has been discovered in Canada as being crucial for diabetes treatment, people tried to get away from needles because nobody wants to inject four or five times a day and in some cases patients have to do that. In order to make a patient friendly product people tried everything. Obviously tablets because they swallowed the tablet. They allowed the patient to swallow the tablet and then absorb it in GI tract. In the GI tract we have so many enzymes that are breaking down proteins that obviously that was not possible.

Disclaimer: EastGate Acquisitions Corporation is an advertorial member of InvestorIntel.