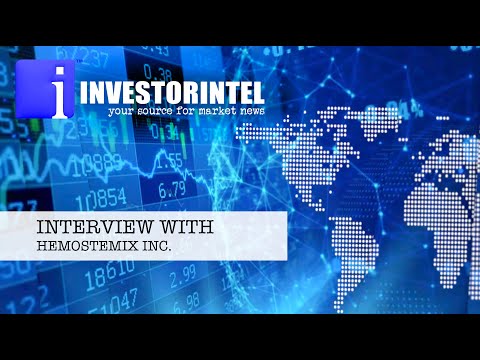 In a recent InvestorIntel interview, Peter Clausi speaks with Thomas Smeenk, Co-Founder, President and CEO of Hemostemix Inc. (TSXV: HEM | OTC: HMTXD), about Hemostemix’s technology that uses patients own blood to treat ischemia in the circulatory system of the body.

In this InvestorIntel interview, which may also be viewed on YouTube (click here to subscribe to the InvestorIntel Channel), Thomas said, “We take blood from patient’s arm. We fractionate out their stem cell from that blood.” He continued, “Then we culture them and change them from a raw stem cell into an angiogenic cell precursor that is programed to address ischemia in the circulatory system of the body. It is common in diabetics, in individuals who suffer from heart disease such as angina or ischemic cardiomyopathy, in wound care.”

Thomas stated that Hemostemix has treated more than 500 patients using the technology which is now in clinical trials. He added, “The second one we patented is NCP (Neural Cellular Precursor). This is a cell that can be used to treat stroke, diseases that have nerve damage.”

Hemostemix is a publicly traded autologous stem cell therapy company, founded in 2003. A winner of the World Economic Forum Technology Pioneer Award, the Company developed and is commercializing its lead product ACP-01 for the treatment of CLI, PAD, Angina, Ischemic Cardiomyopathy, Dilated Cardiomyopathy and other conditions of ischemia. ACP-01 has been used to treat over 300 patients, and it is the subject of a randomized, placebo-controlled, double blind trial of its safety and efficacy in patients with advanced critical limb ischemia who have exhausted all other options to save their limb from amputation.

On October 21, 2019, the Company announced the results from its Phase II CLI trial abstract presentation entitled “Autologous Stem Cell Treatment for CLI Patients with No Revascularization Options: An Update of the Hemostemix ACP-01 Trial With 4.5 Year Follow-up” which noted healing of ulcers and resolution of ischemic rest pain occurred in 83% of patients, with outcomes maintained for up to 4.5 years.

The Company owns 91 patents across five patent families titled: Regulating Stem Cells, In Vitro Techniques for use with Stem Cells, Production from Blood of Cells of Neural Lineage, and Automated Cell Therapy.

Disclaimer: Hemostemix Inc. is an advertorial member of InvestorIntel Corp.