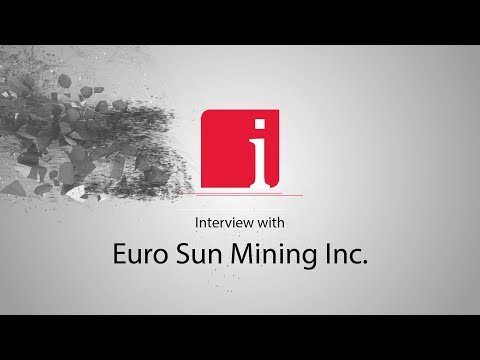 “We are not an explorer. We are a developer. We have got the 10 million ounces (of gold equivalent) in M&I. We have got the mining license granted by the government. So that significantly de-risks. It (The Rovina Valley Gold and Copper Project) will be a mine…It will probably move ahead in the construction phase in the next 12 months.” States Scott Moore, President and CEO of Euro Sun Mining Inc. (TSX: ESM), in an interview with InvestorIntel’s Tracy Weslosky.

Scott went on to provide an update on Euro Sun’s acquisition of Vilhelmina Mineral Inc. which holds a 46.9% ownership interest in Vilhelmina Mineral AB, a private Swedish company with past producing mines in Sweden and Norway. He said that Euro Sun decided to up its stake in the company because they have been working on the mines for the last two years and believed that mines had potential. Scott further added that Euro Sun is working on the feasibility study and construction license for its Rovina Valley Gold and Copper Project which is an environmentally responsible gold project as it uses no wet tailings or cyanide. He also said that gold has been around $1,500 for more than 60 days and if it maintains even at $1400 it will be a whole new gold environment in the new year.