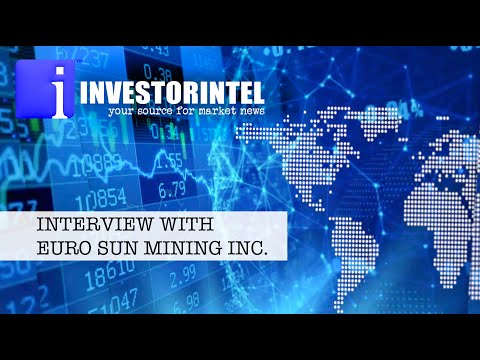 InvestorIntel’s Peter Clausi talks with Scott Moore, President and CEO of Euro Sun Mining Inc. (TSX: ESM)  about Euro Sun’s Rovina Valley Gold Project. “We are probably one of the cleanest projects out there. We don’t use cyanide. We don’t use wet tailings,” Scott said. “Porphyry projects usually have big CapEx. We don’t have a big CapEx,” he added, owing to cheap power, skilled labour force and great infrastructure. “It is big. We can move earth inexpensively and we can make a lot of money particularly with the simple processing that we have.”

Scott also provided an update on Euro Sun’s recently closed C$22.3 million bought deal financing. “We had $17 million of institutional demand in the financing,” he said. “The institutional demand was international, from United States, Hong Kong, Paris, and London with three of the largest funds that are out there – Ruffer, Franklin Templeton and ASA Gold taking significant positions.” Commenting on what’s coming up for Euro Sun, Scott noted that “the stock has gone from 15 cents in March to 60 cents now,” with “some significant catalysts coming up in the next 6 to 12 months.”