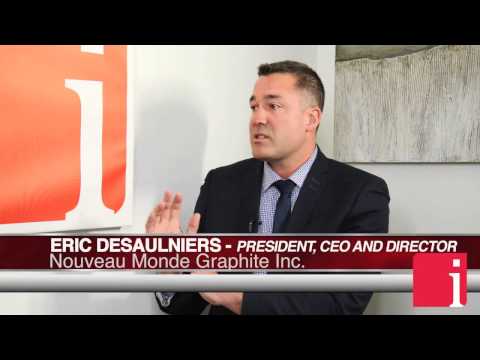 Eric Desaulniers on Graphite demand and prices in 2017

Eric Desaulniers, President, CEO, and Director of Nouveau Monde Graphite Inc. (TSXV: NOU | OTCQB: NMGRF), in an interview with InvestorIntel’s CEO Tracy Weslosky discuss what investors should look for in a graphite company and the overall market in 2017. For instance, he reviews the history of spherical graphite process versus flake graphite and clarifies the three flake sizes: fine, medium and  jumbo – out of which only fine and medium flakes get processed into spherical graphite for lithium-ion battery production. What’s more, graphite (in all flake sizes) comprises 75% of the lithium-ion battery market, whereas lithium-ion batteries are only 25% of the graphite market. Now, in terms of supplying graphite, after floatation, they have 98% purity across all flake sizes and Nouveau Monde has the technology to refine that into 99.99% pure jumbo flake.

Tracy Weslosky: I’m going to put you on the spot here and I’m going to ask you what you think is going to happen with graphite prices this year? We’ve very bullish on graphite. We believe that it’s inevitable that the prices have to lift this year. What do you think? Obviously know: this is a forecast here. Would you like to comment on that?

Eric Desaulniers: Yeah. It’s a very interesting year. Why, because we saw the price going down since 2012 slowly with the refractories that are very weak. The steelmaking industry is not very good in the last few years, but starting in September the spherical graphite started to go up, but the flake graphite wasn’t going up until December. It went up significantly in December, but now there’s something special that is happening. The Chinese removed their export tax. Why did they do that? Their mine was dying because labor costs were going high, pollution is high so the government is bringing in some new tax for these mines, pollution tax. Everyone is waiting to see what will be that pollution tax on the Chinese. This year is very interesting because suddenly you have all the Chinese trying to go out of China again because, not of the export tax, but they need to reinvest in their operation to make it cleaner because it will be taxed soon on this. What the graphite price will do it’s difficult to say. At the same time the demand for lithium-ion batteries is draining a lot of the supply. There’s not so much new mines coming up into production so I see 2017 as being very important to keep going the uptrend. That’s where people will realize there’s not so much graphite into production. It’s very important for the lithium-ion battery. A little bit like lithium last year. Lithium is very sensitive to the lithium-ion battery market because, I think it’s 75% of the market is graphite. For the lithium-ion battery is now 25% of the whole graphite market so it’s less sensitive to this market…to access the full interview, click here

Disclaimer: Nouveau Monde Inc. is an advertorial member of InvestorIntel