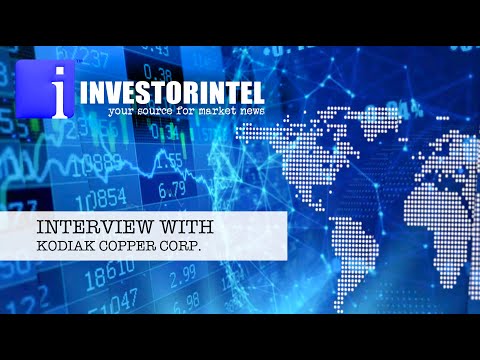 In this InvestorIntel interview, which may also be viewed on YouTube (click here to subscribe to the InvestorIntel Channel), Claudia went on to say, “The company is focused on copper and last year made a very nice discovery very early on.” She continued, “We have certainly had some interesting gold values in our discovery holes. That is obviously encouraging as gold can be a big contributor to the economics in a porphyry mine.”

Kodiak recently attracted Teck Resources Limited (NYSE: TECK | TSX: TECK.A | TSX: TECK.B) as a significant shareholder. “That is a great vote of confidence in our project and company,” Claudia commented. She also provided an update on the Mohave copper porphyry project in Arizona’s copper belt “in the vicinity of a large copper porphyry mine.”

Kodiak is focused on its 100% owned copper porphyry projects in Canada and the USA. The Company’s most advanced asset is the MPD copper-gold porphyry project in the prolific Quesnel Trough in south-central British Columbia, Canada, where the Company made a discovery of high-grade mineralization within a wide mineralized envelope in 2020. Kodiak also holds the Mohave copper-molybdenum-silver porphyry project in Arizona, USA, near the world-class Bagdad mine. Kodiak’s porphyry projects have both been historically drilled and present known mineral discoveries with the potential to hold large-scale deposits.

Kodiak’s founder and Chairman is Chris Taylor who is well-known for his gold discovery success with Great Bear Resources. Kodiak is also part of Discovery Group led by John Robins, one of the most successful mining entrepreneurs in Canada.