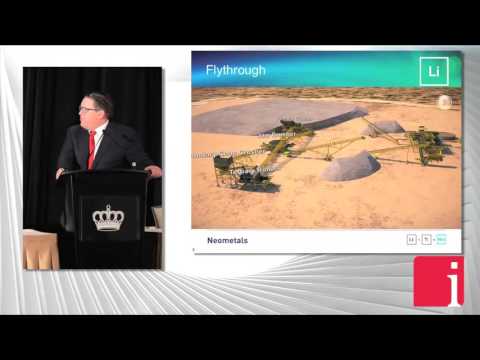 December 3, 2015 — Watch Chris Reed, Managing Director of Neometals Ltd. (ASX: NMT) (@NeometalsLtd) present on why “being in lithium, it’s a bit like being in steel in 2002-2003.” Describing Tesla’s Gigafactory as “one of the world’s largest sheds” during the InvestorIntel Technology Metals Summit on October 14, 2015 in Toronto, he goes onto explain while the car industry may be the sizzle for the lithium industry — “the steak is really in renewable energy storage, solar and wind.” To access the complete Technology Metals Summit presentation, click here

Chris Reed: There’s a 25% chance that the lithium in your phone came from Australia. It was converted into a battery material in China. It’s pretty much in everything, which is good marketing for the lithium business. Essentially the lithium is in the batteries because it is the lightest most reactive metal on the periodic table. Battery demand forecast is good too — I think the guys at Panasonic are looking at 75% per annum compound growth. They’re the biggest producer in the market so they’d be trying to hose that down. We think it’s well over 100%. There’s essentially two main lithium compounds. One is lithium carbonate, which is a first generation material. It goes into the batteries, predominately made by the Chinese and Chileans and Argentinians. Lithium hydroxide is a far better material, but there’s very few plants in the world. The Canadian and U.S. governments have been trying to fund development of that. Tesla, with their Gigafactory, and there’s no IP in the Gigafactory. It is one of the world’s largest sheds. That’s it because, you know, for lithium hydroxide it goes from Australia to China to become hydroxide. It goes to Japan to Sumitomo for Tesla cause Panasonic uses Sumitomo to make a cathode. It then goes to Panasonic to make it into the battery. Then they send it to Tesla and they put it into the battery management system. That’s really where their IP is. Then it goes into the car. They’re going to do it all under one shed and it cuts the cost of the end product by about 30%. Now it’s always good to say, okay, well, lithium carbonates are first generation. Lithium hydroxides are second generation. Tesla’s cars use lithium hydroxide. Lithium hydroxide trades at about a $2,000.00 a ton premium to lithium carbonate. All the growth in lithium hydroxide is in those green bars and it’s increasing rapidly. Now we have a look at the lithium fundamentals. The cars are great and, you know, you can see them. It’s the sizzle. The steak is really in renewable energy storage, solar and wind. This was a forecast from a professor at the University of Western Australia. As the prices of the battery storage comes down their adoption goes up. Now we were going to be at about $250.00 per kilowatt hour in 2020 as it relates to a power pack, which is a 100 kilowatt stack, $25,000.00 U.S. dollars. He’s brought forward that curve about 5 years. Being in lithium, it’s a bit like being in steel in 2002-2003. The Chinese are building all these battery plants, in that case they were building steel plants, and you knew the iron ore demand would come. You’ve got every volume car manufacturer in the world with plugins and some moving to electrics, but…to access the full presentation, click here