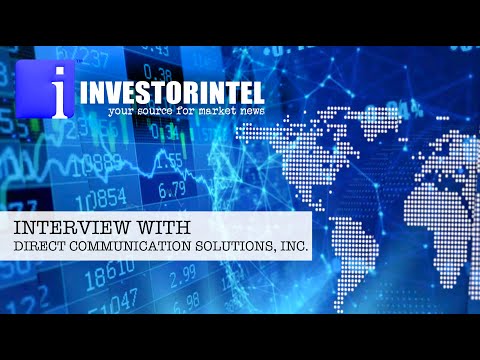 “We did $16 million last year in revenue. We are on track to ship some of that revenue into more recurring revenue stream at higher margins. We are undervalued…” starts Chris Bursey, CEO and Founder of Direct Communication Solutions, Inc. (CSE: DCSI | OTCQB: DCSX) (DCS), in an interview with InvestorIntel’s Tracy Weslosky.

Chris went on to say that DCS is focusing on being a solutions enabler. DCS builds solutions for companies that allow them to take advantage of the Internet of Things (IoT). MiSensors is a part of the overall solution. He added, “If you look at the market today, it is one sensor function per sensor. We have combined eight sensor functions into one sensor. It is going to allow us to be disruptive in the market. It is an open architecture that we have built in the backend. You will be able to inject other sensors and other technologies as well.”

Chris also spoke on DCS’ Brewsee platform which is a beer life cycle monitor and control system. He said that the average loss in a keg of draft beer is roughly 20% across the industry. He continued, “We have designed a solution that will monitor the temperature, the flow, the CO2 pressure, foam over beer and shutoff valves. The bar and restaurant owners can take that data and see how many ounces of beer were poured versus how many are actually sold.”