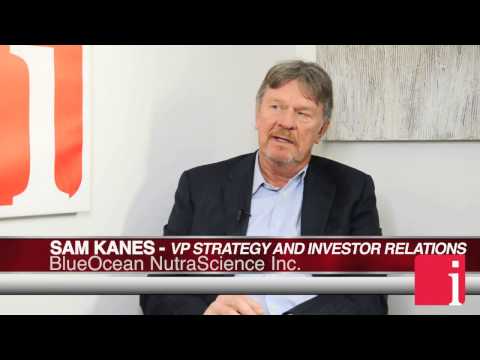 BlueOcean’s founder on astaxanthin – the “next wonder antioxidant”

Sam Kanes, VP of Strategy and Investor Relations for BlueOcean NutraSciences Inc. (TSXV: BOC) in an interview with InvestorIntel’s CEO Tracy Weslosky discuss the world’s first shrimp oil suppplement: a superior alternative to krill and fish oil supplements with respect to the health of the human body. Before going public, BlueOcean had discovered a way to triple the growth of algae containing astaxanthin via gas infusion technology. Sam refers to this antioxidant as “the king of the carotenoids” –The shrimp from which their oil is produced feed on these algae. On the commercial end, he tells us to expect sales and distribution press releases. The annual Newfoundland shrimp shells can support a long term shrimp oil sales potential of $300M/y at full usage. He also states that they are planning to attend the world supplement trade shows in Las Vegas and California.

Tracy Weslosky: Sam, BlueOcean’s very interesting to me. Your stock has been moving beautifully, what I would love for you to do is introduce the InvestorIntel audience to what BlueOcean NutraSciences are….

Sam Kanes: I’ve been with the origin of this company for 10 years. The last 3 years we have focused all our energy and finances on developing the world’s first shrimp oil, which is superior to krill and far superior to fish oil in its composition and benefits to the human body, brains, eyes and heart.

Tracy Weslosky:  Tell me more…Dr. Duchesne has written two stories about you already. We’ve had tremendous feedback about it. He said that your latest news release about restarting this algae gas infusion subsidiary is going to be virtually no cost to you and allow you to tap into three big markets. Can you tell us what he means by that?

Sam Kanes: First of all, the shrimp oil we manufacture is extracted from the shells of residual waste after cooking and peeling shrimp in Newfoundland. Those are pristine waters up there and the shrimp all eat the algae we’re focused on attempting to grow, namely astaxanthin based HP algae and omega-3 algae. What we’re selling today is in fact omega-3 and astaxanthin from the same algae. It just happens to be eaten and caught by the shrimp that we’re extracting the oil from. Why gas infusion is that’s the origin of the company. We IPO-ed 5 years ago with Macquarie. We raised $3½ million dollars to develop opportunities in the then booming algae world, which subsequently collapsed, where proven commercial gas infusion technology rights were given to the company in the IPO to stimulate accelerated algae growth that no others could do by dissolving CO2 bubbles so small they do not come out of water. That’s exactly how algae eat them. By doing so we proved we could triple the growth rates of algae with The National Research Council Algae Labs in Sandy Cove, Nova Scotia for over 2 years before we went to IPO markets…to access the complete interview, click here

May 23, 2018 – “The biggest opportunity by far for dissolving any gas into any solution is carbon and carbon […]

“We expect revenue by Q3, likely sooner from lettuce microgreen, basil spice producers that grow in greenhouses indoors that use […]