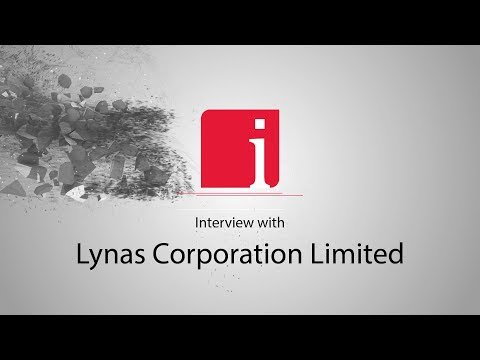 “We see the US market as a wide-open market. The US has allowed itself to be disintermediated in the rare earths industry and that is a risk for the US manufacturers. We have seen that the Chinese have, in over 30 years, steadfastly marched down the value chain. So today they are in the business of rare earths mining, separation, metal making, magnet making, component making and ultimately the finished material. Many would say at what stage a US vehicle is a US vehicle. Is it when it is just assembled from components that have been shipped in from China? There is a large component manufacturing industry in the US and having the security of supply for the inputs to that industry is very important. So we see the US as a market where, with the right presence and the right development, there is significant opportunity for growth. With respect to our MOU with Blue Line. Texas is actually a great place to do business. We are very much looking forward to operating there. The first stage of what we do there will be focused on heavy rare earths separation. Heavy rare earths cannot be separated anywhere except China…Heavy rare earths are essential. High-performance magnets used in electric vehicles must have atleast a small component of either dysprosium or terbium added to them and of course, they are used in many other applications including medical and particularly in some of the defense applications. A heavy rare earths separation line as a starting point we think is very important and it builds out our product portfolio. What we are doing in the US will not be limited only to heavy rare earths, over time we would expect that we will continue to grow, the market will grow… We do believe that if we establish the facility we will create additional activity in the rare earths supply chain…” States Amanda Lacaze, Managing Director and CEO of Lynas Corporation Ltd. (ASX: LYC), in an interview with InvestorIntel’s Tracy Weslosky.

Amanda went on to provide an update on Lynas’ plant in Malaysia. She said that Lynas had the fourth scientific review done in Malaysia which came out with a clean report card that stated that the plant is low risk and compliant with all regulations. The company also recently announced the renewal of its operating license in Malaysia. She also provided an update on Lynas’ growth plan. She said that Lynas is focussed to be a pure-play rare earths company. The company believes that by being a pure play it will be able to give its shareholders the best return. She said that in 2018 Lynas implemented a project called Lynas Next which took the nameplate capacity from about 5,000 tons a year of NdPr to about 7,000 tons a year of NdPr. In May the company announced the Lynas 2025 plans where by 2025 the company will produce 10,500 tons a year of NdPr.