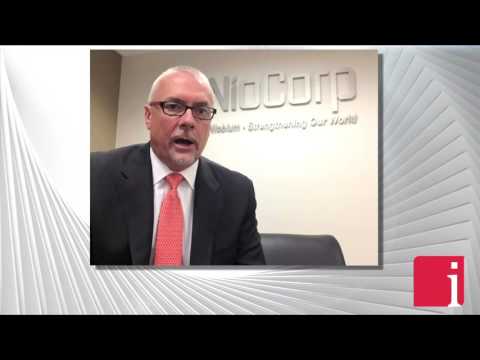 Mark Smith on the strategic importance to the U.S. Government of NioCorp’s niobium and scandium

August 26, 2016 — Mark Smith, President, CEO and Executive Chairman, of NioCorp Developments Ltd. (TSX: NB | OTCQX: NIOBF), in an interview with InvestorIntel Sr. Editor Fred Cowans discuss the strategic importance of niobium and scandium. Specifically, Mark explains that there is no substitute for niobium in oil and gas industry as it makes steel lighter and stronger and also provides temperature and corrosion resistance. Niobium is also highly used in automobile industry as just $9.00 worth of niobium in an average car can reduce fuel usage by about 5%. Both niobium and scandium are of strategic importance to the U.S. Government as none of them are produced in the United States today. In this interview, Mark provides an update on NioCorp and how the Elk Creek project is progressing well. He also communicates confidence in how NioCorp will achieve some of the highest recovery levels for niobium, scandium and titanium.

Fred Cowans: Well, thank you. Now we’ve caught you in Colorado. This is another story that’s been on wheels in the market of recent. I think we should just start for those that don’t really know about the use of the metals for you to give us a little rundown on niobium, titanium, scandium please.

Mark Smith: Perfect. Let’s start with niobium because that was really, kind of, the foundation of what we were looking at when we first discovered this ore body. Niobium is a element that you add to steel production and it makes the steel much lighter, but it makes the steel much stronger. It has the added capabilities, however, of providing some very good temperature and corrosion resistance. It has some really phenomenal applications in things like oil and gas. When you get into the deep-water drilling or the fracking that everybody hears about today niobium-based steel is really— you know, there’s no substitute for that material in those applications. It’s largely because you need the strength of that steel and you need the corrosion and the temperature resistance associated with it. Interestingly enough though, oil and gas is the second largest— I’m sorry, third largest use of niobium in the world. The first largest use is actually in architectural buildings, bridges and road construction and that really goes to the strength that niobium adds to the steel and, again, makes you and I as inhabitants of buildings or as we’re driving across bridges or over roads, it makes it safer for us. The agencies and governments that put a lot of the infrastructure in like to use niobium in construction of those items because of the corrosion resistance. It actually provides a much longer life with these infrastructure requirements as well.  Again, number one use of niobium is infrastructure. Number two use is actually the automobile. This is one I actually like to talk about the most Fred because I think most people can really touch it and relate to it very well. When we put niobium into the steel in an automobile it does two things for us. One, it makes you and I safer as the owners of that automobile just in case we get into any accidents. I know that never happens for you and I, but for others. Then second of all that niobium makes that car a lot lighter. Only about $9.00 worth of niobium in your average car can actually reduce your fuel usage by about 5%. This has been a primary method of the automobile industry to achieve the mileage requirements that the EPA has on them, the CAFE standards as they’re called where they have to have so many miles per gallon in order to pass those tests. Those are your three primary uses, architectural and infrastructure, the oil and gas industry and automobiles. There’s a whole bunch of others that are also very important, but much smaller in terms of volume. There’s big use about 100,000 ton per year market, $2½ to $3 billion a year market right now. It’s significant and it’s one that we certainly are excited about involved with….to access the complete interview, click here

Disclaimer: NioCorp Developments Ltd. is an advertorial member of InvestorIntel.

Lifton, Clausi, Cashin and Putnam on how the time for scandium is now